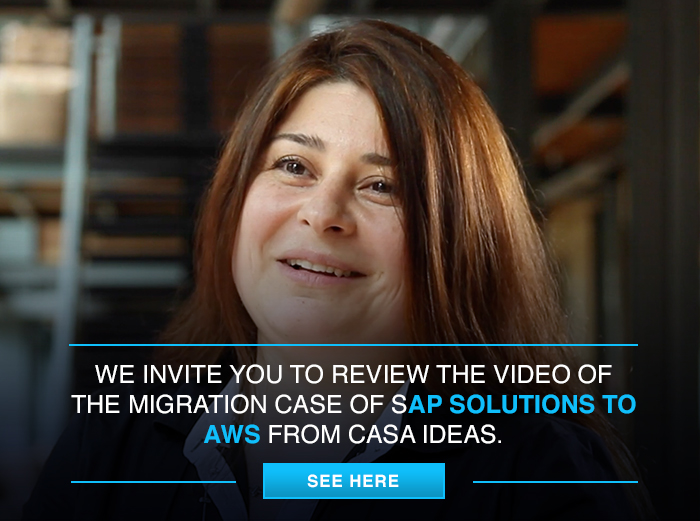 The project included almost 200 integrations with legacy systems in Colombia, Peru, Bolivia, and Chile, as well as in distribution centers in each country and done in remote mode. The migration of all the productive systems took place during a weekend and was a complete success, to the point that it was totally transparent to users, who were already working from home.

In Chile, virtually everyone has purchased more than once at CasaIdeas. This company is best known for democratizing design and is one of the most preferred when looking for useful objects at convenient prices for the home or family. The key to its success is based on three major pillars: functionality, innovative design, and affordable prices, allowing customers to acquire versatile and attractive products to make home a beautiful and welcoming place. The company began operations in 1993 and currently has 70 stores in four countries: Chile, Peru, Bolivia, and Colombia.

CasaIdeas’ decision to maintain employees without wage pay suspension during the COVID-19 crisis was highly valued by the public opinion, to the extent that, according to a May 2020 article in AmericaRetail, CasaIdeas is leading social media interactions in the Chilean retail sector. The high demand for their online store exceeded even the most optimistic forecasts and, after a few days of adjustments, the company has been able to keep up with the service that its customers value.

In this trade, technological and social transformations had already been generating a significant impact in customer’s purchasing behaviors, now hastened with the pandemic. Fortunately, CasaIdeas had been preparing for a long time and has a digital transformation strategy that allowed them to react quickly.

In this regard, to respond with more agility to service peak demands on certain periods of the year, such as Christmas or Mother’s Day, during 2019 CasaIdeas launched a company digitalization plan, starting with e-commerce projects. Later, in early 2020, the project to migrate its platform to cloud began, with the objective of ensuring operational continuity, as well as having more flexibility to escalate or reduce its IT infrastructure. Novis, its technology partner for more than 10 years, was responsible for migrating the entire SAP platform to Amazon Web Services.

Jane García, Business Applications Assistant Manager at CasaIdeas, points out: “Evangelizing this kind of project among functional users is difficult, but given our digital transformation strategy, the value of minimizing IT platform latent risks and being able to ensure good response times was understood. It is like paving the road for what we wish to build.

Fortunately, we had no problems with Novis’ service in Sonda’s platform, but in AWS we are safer against virus attacks, and have a better reaction capacity if a serious incident occurs.”

One of the most complex challenges the project faced was the integration with nearly 200 legacy systems in Colombia, Peru, Bolivia, and Chile, in addition to the distribution centers in each country, overseen by operators such as DHL, which in turn have service areas distributed in several countries. “It took much more effort than we had anticipated”, she acknowledges.

The project was concluded in 11 weeks, entirely within the planned schedules, and Novis worked exclusively in remote mode, at first from the corporate offices and later from home, since March 16.

Jane García states: “It was a silent project to CasaIdeas’ users. The last step, migrating all the productive systems, was done during a weekend and was a complete success, to the point that it was totally transparent to the users, who were already working from home; there were no critical incidents related to the migration. The new platform, besides its flexibility to increase and decrease dynamically, ensures better recovery times (RTO), and minimizes data losses (RCO) in case of any disaster”.

– What would you recommend to others who are considering similar projects?

“You must be meticulous in before and after migration dimensioning to define the communications requirements. We did it with little anticipation, already working from home, and had to quickly increase bandwidths, just in case.
Novis is a very good partner; they advise us well. And we follow their recommendations, as when you go to the doctor, because for a service to work well it needs an active counterpart. We have a long trustworthy relationship, and we prefer them for strategic matters. Projects work out as planned jointly, with no unpleasant surprises”, says Jane García.

For more information about our services, we invite you to contact us.

You can learn more about technical details in AWS’ site.